Sinus Barotrauma
We need you! See something you could improve? Make an edit and help improve WikSM for everyone.

From WikiSM
Jump to: navigation, search 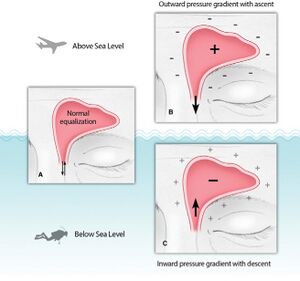 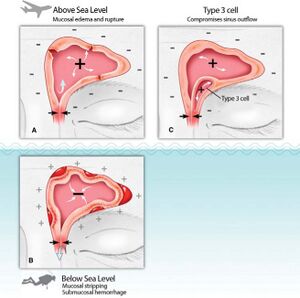 Illustrations that depict scenarios of sinus barotrauma. (A) Reverse squeeze or compression injury in an inflamed or partially obstructed sinus. Increased air expansion and elevated intrasinus pressure during ascent, without compensated pressure release, produces an outward, “expansile” compression injury of the sinus mucosa against the bony sinus outer walls; this results in mucosal edema and rupture. (B) A squeeze or decompression injury in an inflamed or partially obstructed sinus. Decrease in gaseous volume within the sinuses during descent creates intrasinus decompression without inward pressure equalization; this results in “pulling” forces within the sinus cavity that can cause mucosal edema, avulsion of the mucosal surface from the bone, and hematoma formation, depending on the degree and rapidity of the pressure shifts. (C) Type 3 frontal cell that compromises sinus outflow; a reverse squeeze or compression injury may occur in both the frontal sinus and obstructing type 3 cell, producing severe, but focal, symptoms.[10] 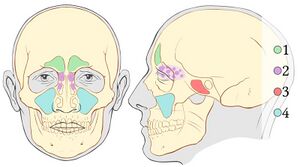 Illustration of the paranasal sinus anatomy where patients may develop or report pain.[29]